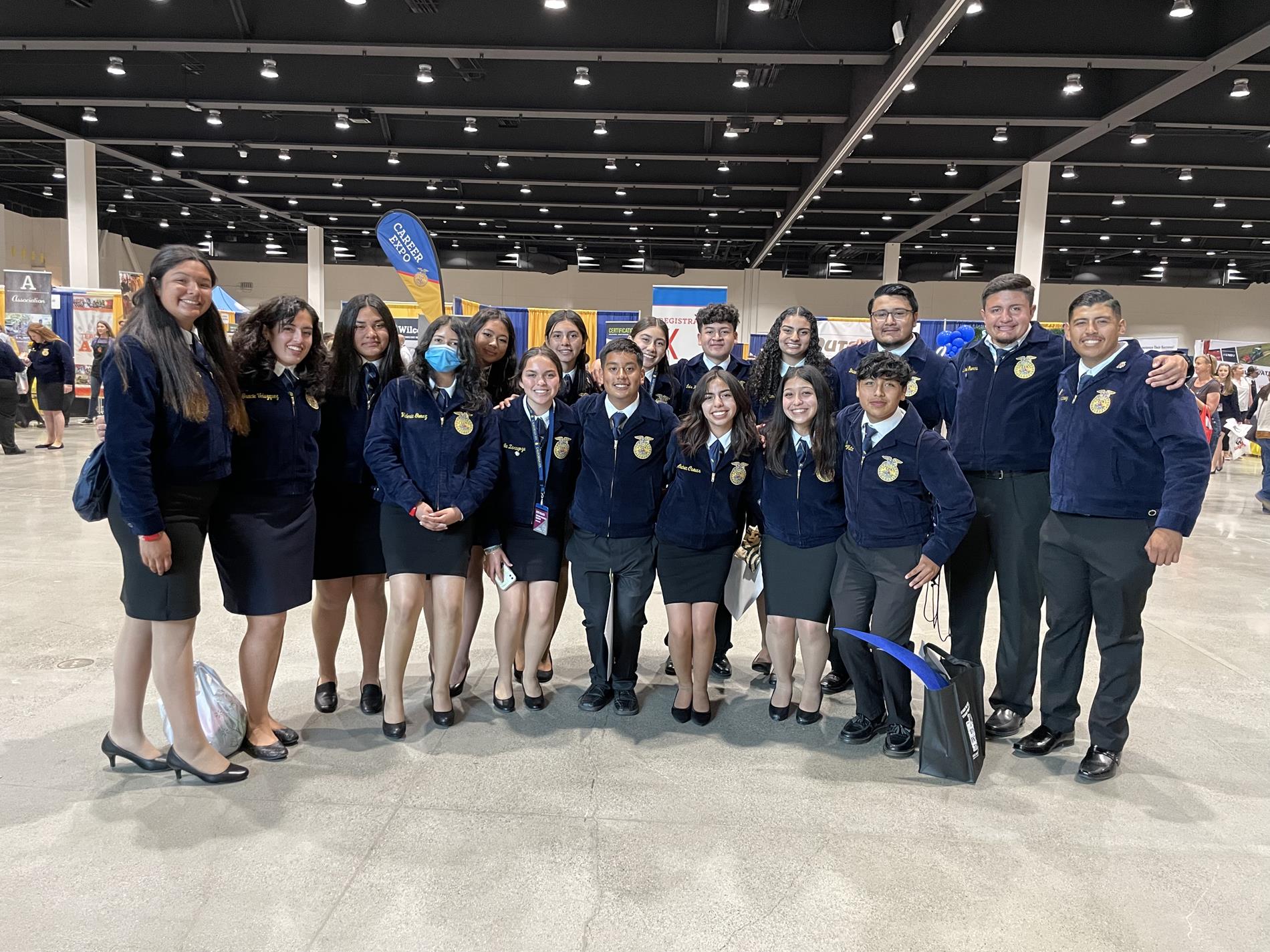 California FFA’s theme this year is “Embrace the Adventure.” The 94th State FFA Leadership Conference was a time to celebrate the achievements of our students, kick-start the next generation of agricultural leaders in our programs, and to provide support for Marc Cabeliza and the state officer team. Marc is a former Pioneer Valley graduate and past state FFA president.

Marc and his team spent the last year taking a gap-year from college to give back to the Agricultural Education field throughout the state. They traveled to every corner of our state meeting members, planning and coordinating leadership conferences, learning more about agriculture through industry tours, and serving as a liaison between all stakeholders involved in Agricultural Education. Marc is the first student from Pioneer Valley to be elected to State Office and made history as the first Filipino-American to serve in this capacity. This organization provided a platform for him to unlock his connection to agriculture, share his story, and build connections with the 95,000 members in the Association.

Marc is “grateful for this experience and hopes that future students find their passion in agriculture just as he did.”

Two Pioneer Valley FFA seniors, Elizabeth Beebe and Gillian Villa, submitted applications, videos, and engaged in virtual interviews to become a part of the 2023 State Officer team. Both ladies made it to the final in-person interviews in Sacramento and advanced to the top 16. We are proud of these young leaders and the legacy they have created for future members in their leadership development.

Elizabeth Beebe, senior, competed in the Extemporaneous Leadership Development Event. This competition requires students to gather a binder of research on various agricultural topics. Beebe was challenged to draw a random topic, then prepare and deliver a 4-6 minute speech in 30 minutes. She was asked five minutes’ worth of questions from a panel of judges. Beebe was one of the final four in the South Coast Region and made the top 24 in the State.

Maria Ramos Lemus, junior, competed in the Job Interview Leadership Development Event. This contest challenges students to reflect on their experiences and develop skills to interview effectively in both written and oral communication. Ramos completed a job application, submitted a resume, drafted a cover letter, and was put through a series of mock interviews for an Assistant Sales Position. Ramos was one of the final four in the South Coast Region and made the top 24 in the State.

Savannah Davis, sophomore, competed in the Impromptu Leadership Development Event. This competition challenged Davis to research various agricultural topics and be able to stand and deliver a 2-minute response to a randomly drawn topic on the spot. The intention of the Impromptu Contest is to prepare students for real-world speaking for public statements, media coverage, and general questions regarding the agriculture industry. Savanah made the top 24 in the State.

The Panthers also excelled in the Proficiency Award Program to showcase their dedication and investments through their Supervised Agricultural Experience projects. Pioneer Valley had four State Finalists who interviewed alongside two other competitors for State Recognition:

Maria Ramos Lemus, junior, was selected as a State Finalist in Outdoor Recreation. Maria has volunteered at The Patch Santa Maria and has assisted in working the agrotourism event, selling pumpkins to the community, and engaging families and children with activities during the main event.

Antonio Hernandez Reyes, senior, was selected as a two-time State Finalist in the areas of Vegetable Production and Specialty Crop Production. Antonio works for his family’s farming business growing a wide array of peppers, beans, and squash. Antonio also operates his own marigold and Indian corn business and sells his produce direct to consumers. Locals flock to his farm during Dia de Los Muertos to purchase bunches of marigolds to honor this beloved holiday. Antonio was awarded as the State Proficiency champion in the area of Specialty Crop Production. He will be moving on to compete for National honors next year.

Students that excel in academics, demonstrate excellence in the three-ring model of agricultural education, and have earned their State Degree are eligible for $2.7 million in scholarships through the FFA. Pioneer Valley had four state scholarship finalists this year at State Convention.

Gillian Villa, chapter and South Coast Region president, was a finalist for the Byron J. McMahon Memorial Scholarship. Villa will be attending Kansas State University majoring in Agribusiness and Global Food Systems with a minor in Food Science. She wishes to pursue a career with the United States Department of Agriculture.

Elizabeth Beebe, chapter and South Coast Region vice-president, was a finalist for the Almond Board Scholarship and was awarded $1000. Beebe will be attending Cal Poly San Luis Obispo

and majoring in Agricultural Communications. Her future plans involve continuing her education in pursuits of becoming an Agricultural Lawyer.

Antonio Hernandez Reyes, senior, was a finalist for the Universal Technical Institute and was awarded a $10,000 scholarship. Antonio plans to finish the Diesel Technology program and hopes to start his own tractor and machinery repair business and help the family farming business.

Brian Hernandez, senior, was a finalist for the Universal Technical Institute and was awarded a $10,000 scholarship. Brian plans to finish the Diesel Technology program and enter in the FENDT program to become an agricultural mechanic and to one day have his own cattle ranch.

In addition to student success, our very own Dr. Paul Robinson also earned state honors, when he competed in interviews for the State Star Administrator award. Dr. Robinson has been a constant supporter of our district agriculture programs, aiding in funding to provide relevant Career Technical Education experiences in agriculture for all students in our district. Dr. Robinson has hosted a myriad of local, sectional, regional, state, and national FFA leadership development activities at the newly opened Mark Richardson Career Technical Education Center and Agriculture Farm. Dr. Robinson has been instrumental in expanding our CTE pathways on campus and has supported program growth and expansion at each of our district sites. We are proud of Dr. Robinson, what he has provided for our district ag programs, and for the impact he will continue to make in this organization.

Pioneer Valley Panthers truly “Embraced the Adventure” this past year and demonstrated resilience, determination, and strength in diversity. Pioneer Valley agriculture advisor states, “All of this success is built upon the village it took to get the Panthers where they are. The efforts of all students, parents, staff, administrators, support staff, and community members play an integral role in shaping our agriculture programs and allow our students to shine in these capacities. We are grateful for the continued support and are proud of our students' achievements.” - Tyler Dickinson, PVHS AG Teacher